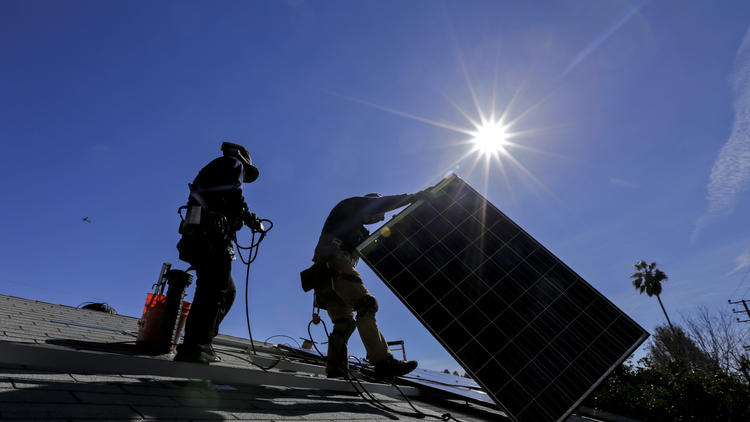 Like some kind of 21st century Willy Wonka, audacious entrepreneur Elon Muskchose a prime spot on the Universal Studios Hollywood backlot tour to unveil his latest attempt to energize an industry — roofs that generate solar power but look like no other.

Musk, the chief executive of Tesla Motors and chairman of SolarCity, showcased a line of high-design solar roof tiles that would replace clunky solar panels and tie into an upgraded version of the Tesla wall-mounted battery for those times when the sun doesn’t shine. The glass solar shingles resemble French slate, Tuscan barrel tile or more conventional roofing materials with a textured or smooth surface.

“The key is to make solar look good,” Musk said during the product introduction staged on the old set of ABC’s “Desperate Housewives” series, where he had re-roofed four of the Wisteria Lane houses. “If this is done right, all roofs will have solar.” 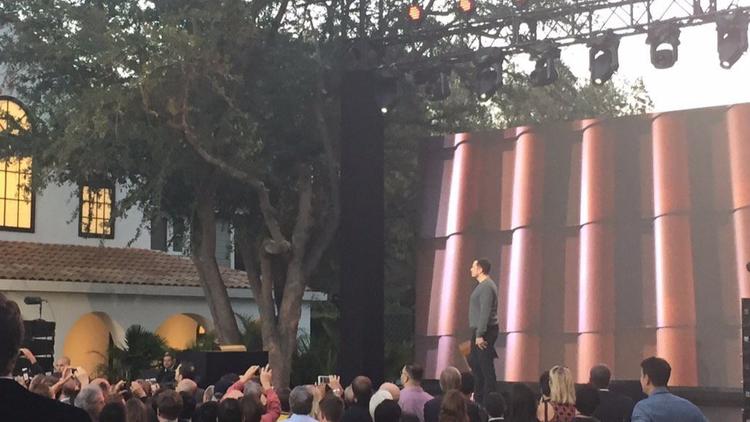 The move comes as California’s solar industry grapples with slowing growth and other challenges despite aggressive state mandates to boost the use of renewable energy.

Nationwide, sales of residential solar panels have held fairly steady in the year ended June 30, according to the Solar Energy Industries Assn.

Experts attribute the slowing to depletion of the pool of early adopters as well as to policy changes in California and other states governing how solar owners are compensated for electricity they produce and sell to utility companies.

In addition, many homeowners were worried whether Congress would renew a 30% federal tax credit set to expire at the end of 2016. Congress extended the credit through 2019 at 30%, after which it gradually phases out for residential solar customers.

The California solar industry still expects 2016 to finish with an expansion.

“We’re seeing a slowdown in the market but it’s not a downturn,” said Bernadette del Chiaro, executive director of the California Solar Energy Industries Assn. “We’re going to install more rooftop solar this year than we did in 2015.”

A significant driver in the solar market is the continued drop in the price of solar panels. The typical residential solar system runs about $8,000 with government incentives, including the 30% federal tax credit.

The supply of solar panels for residential and other uses almost doubled from 32 gigawatts in 2012 to 60 gigawatts in 2015, according to Navigant Research of Chicago. That’s enough to power roughly 45 million homes.

But capitalizing on the falling price of solar panels has been difficult for an industry that continues to struggle with other high costs such as labor.

Technological advancements in rooftop solar will help push overall industry sales from $3 billion in 2016 to $38 billion by 2025, Navigant projects. And by offering consumers a variety of solar system options, industry executives believe they will have an increased ability to compete with the price of electricity produced by utilities. 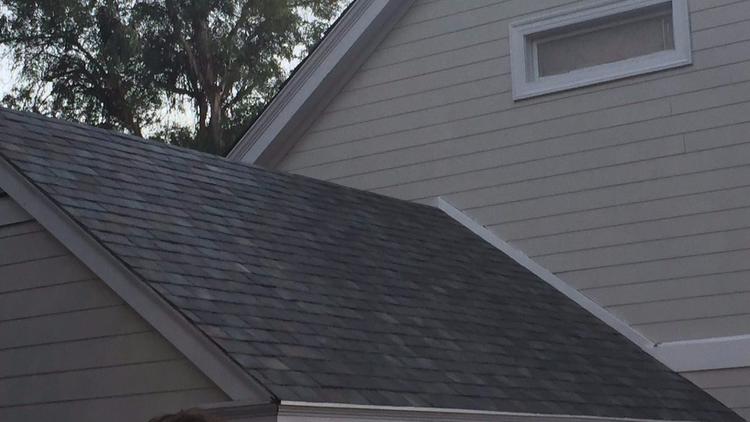 Price and styling will likely prove critical for the industry in attracting customers as current solar power owners have seen some of the benefits of self-generating electricity erode. Utility companies have complained that solar owners haven’t been paying their share of the cost to maintain the network of power lines, substations, transformers and power plants that make up the electric grid.

Regulators across the country have added costs to solar power owners such as higher rate tiers and mandatory fees that have increased per-household costs by as much as $10 to $20 a month in California, Del Chiaro said.

In some states such as Florida, utility companies have fought the growth of rooftop solar with ballot initiatives that protect their monopolies on centralized power while penalizing solar owners.

Virtually all quarters agree that the real future for solar — and much of the energy industry — depends on electricity storage, which banks solar power for when the sun isn’t shining. The cost of electricity storage is high but, as with solar panels, is dropping rapidly.

Several solar companies in recent months have announced partnerships with storage companies to offer a package to consumers. Still, it remains too pricey for the average consumer.

“All of these strategic alliances are smart,” Del Chiaro said. “They’re critical. We basically have to sell solar packaged with storage.”

In July, Musk’s Tesla Motors offered to buy SolarCity for more than $2 billion. As a battery maker, Tesla combined with SolarCity gives the company its own version of a storage and solar partnership.

Tesla is expected in November to finalize its acquisition of SolarCity, which is run by Musk’s cousins Lyndon Rive, who is chief executive, and Peter Rive, the chief technology officer.

People spend a lot of time trying to create an attractive home. They don’t want funny glass boxes stuck on one side of their roof.— Andy Ogden, chairman, industrial design graduate program, ArtCenter College of Design

But Musk, with his flamboyant style, did not stop there. Instead, he is looking to one-up his competition.

Musk is working to build a personal alternative energy ecosystem connected by software and harmonious design, all under the Tesla brand name. The idea is that green-minded homeowners will mix with performance-oriented automotive geeks at Tesla retail stores to shop for electric cars, charging stations, solar rooftops and wall-mounted batteries for energy storage, available separately but designed to work best as a system.

During an August conference call with analysts, Lyndon Rive all but bet the announcement would trigger growth in SolarCity sales as the company lures homeowners off the sidelines with its new design. Rive noted that 5 million U.S. homes get new roofs each year — “a really big market segment” that won’t cannibalize sales of SolarCity’s traditional product.

Revenue during the first six months of the year almost doubled that of the same period in 2015, but the company’s net loss for 2016 was more than $230 million higher.

SolarCity’s value is far from its February 2014 high of $84.96 per share. The company’s stock price hovers around $20 a share now.

Julien Dumoulin-Smith, an analyst with UBS who focuses on electric utilities and alternative energy, said new products and flashy presentations are less important to SolarCity than the fundamentals.

“What they need to do is bring down the costs,” Dumoulin-Smith said. “The meat and potatoes issues for this company are much more pressing.”

In an effort to curb costs, SolarCity and home-sharing company Airbnb this month announced a partnership under which Airbnb hosts and renters are eligible for a rebate of up to $1,000 on solar panels through SolarCity. In addition, SolarCity customers who become Airbnb hosts receive a $100 travel credit.

With this kind of partnership, solar firms reduce the cost of customer acquisition, a large expense.

Solar firms also have been adding financing options other than the leasing model that was a signature strategy of SolarCity.

In June, SolarCity said it had begun offering 10- to 20-year loans to customers that would allow homeowners to gain the benefit of government incentives the leasing programs did not offer. The loan program allows homeowners to own the panels without huge upfront costs and receive the 30% federal tax credit — an incentive SolarCity and other solar leasing companies claimed themselves since they still owned the solar panels.

For Musk, who just reported a surprise quarterly profit at Tesla, design has always been supreme.

The company had fashioned its Powerwall home storage batteries with lines that complement the silhouette of a Tesla Model S; but to Musk, SolarCity’s solar panels looked like the same commodity products every other solar installer was selling.

He pushed the company to make the product not only cheaper and more energy efficient, but also better looking.

“This needs to be an asset to your house,” he said, repeating it in public appearances over the past few weeks. “It needs to be so good that when it’s done you call your neighbors over to show them how proud you are.”

The new Tesla-SolarCity roof tiles will be available next summer, Musk said Friday, with rollout starting in California. He didn’t give details about cost or efficiency.

Musk says he spends most of his time on engineering and design, and on Wednesday emphasized the essential relationship between the two in a conference call with stock analysts.

“It’s important to have tight control over the production of solar panels … to have a beautiful roof product,” he said. “We’ve got to be able to iterate rapidly and have them made exactly how we want them.”

A 2014 survey by home-solar power provider Lumeta found that slightly under a third of respondents considered appearance very or extremely important, while slightly over a third said the look was slightly important or not important at all.

“People spend a lot of time trying to create an attractive home,” said Andy Ogden, chairman of the industrial design graduate program at the ArtCenter College of Design in Pasadena. “They don’t want funny glass boxes stuck on one side of their roof.”

Making solar roofs more attractive, he said,  “increases the number of people who will install solar.”