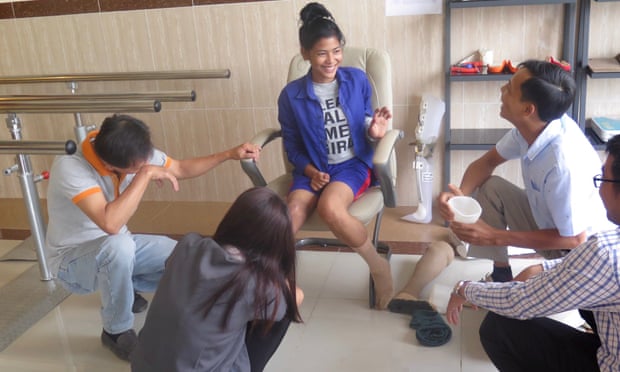 Before the vehicle that she was travelling in flipped over and trapped her right leg, Leakhena Laing was a happy teenager who enjoyed climbing trees and playing football with friends. After her limb was amputated, she could only sit and watch.

“It was difficult to even get a glass of water. I felt hopeless, very sad and embarrassed to be around other people,” says Laing, who was forced to abandon school after the accident nearly four years ago.

She used crutches for two years, before receiving a below-knee (transtibial) prosthetic plaster limb, which improved the quality of her life, although it meant regular visits to a clinic in Phnom Penh, Cambodia’s capital, nearly 30 miles away from her home in Borset district, for refittings.

The World Health Organisation estimates that 30 million people in low-income countries need prosthetic limbs. There is hope that 3D scanning and printing may be able to help.

The computer process enables medical staff to save work (digital files), share them with colleagues for review and keep a digital record of a patient’s history of devices. As Rotto describes, “what that literally looks like is a Google docs for prosthetists, where they upload the digital model they made. They can then send a request to someone saying ‘hey can you take a look at this thing that I just made?’”

Nia’s clinical study of 3D technologies for the production of lower-limb mobility devices, being conducted in three developing countries, is the first of its kind and scale anywhere, with others in other parts of the world still in an exploratory phase or not working with clinical partners or patients yet.

“We’re trying to give clinicians tools to make them more efficient because there’s a tremendous shortage of prosthetists and orthotists in the world,” says Nia president and CEO Jerry Evans, stressing the technology was not designed to replace them.

Speeding up the process

In the developed world, a quarter of prosthetics and orthotics clinics which once used conventional plaster casts – which usually take between one to two weeks to deliver – have replaced them with computer-aided design and computer-aided manufacturing (Cad/Cam) equipment for custom-made devices that can be delivered within two days, say Vorum.

The company, which pioneered Cad/Cam equipment for custom-made prosthetics, orthotics and footwear nearly three decades ago, predicts 3D technology will be used in combination by almost all of these areas within a decade.

London-based startup Andiamo was founded by Naveed Parvez and wife Samiya Parvez in 2014, after a harrowing and frustrating experience acquiring orthotics for their late son, Diamo. Andiamo are producing and trialling their hand splits, AFOs and Ground Reaction Ankle Foot Orthotics (Grafos) using 3D printing technologies, and aim to offer their services to the public early next year. Down the track Andiamo have global expansion in their sights, but warn there are risks considering the temperature and humidity of materials that are “still quite poor”, among other concerns.

“By making sure (the technology) works in the UK first we know that it will have a solid foundation to be used elsewhere,” says Naveed Parvez.

3D printing is having a “transformational effect on the medical industry”, especially the prosthetics and orthotics sector, but also in orthodontics, says Joe Kempton, an analyst from global technology market firm Canalys. He estimates total spending on 3D printing, including printers, materials and services, will reache around USD $947m in 2016, and jump to $1.6bn by 2018.

“3D printed prosthetics development is being used more and more in hospitals and clinics worldwide,” says Kempton. “It is becoming more common than not for orthodontist clinics to make use of 3D printing, and this will only continue to grow in the future.”

“The ability to quickly repair and adapt any part of the prosthetics is incredibly useful, especially as the body changes.”

In Cambodia, Laing is hoping new technology could build upon what a plaster cast has already given her, that is the ability to “cook for myself, fetch water for my family, walk and do other things”.

“I am very happy to be part of this study,” says Laing.

She still dreams of what she intended before her accident, to become a beautician.

“I want to continue my education and open a salon,” she says.