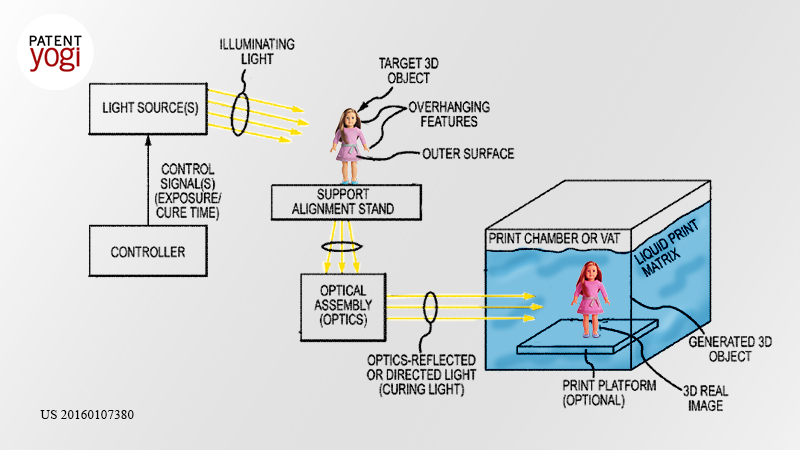 It’s not news the Disney is a force in the 3D printing industry, but now a new series of patents could disrupt the entire industry. The patents lay out a system that changes the whole process of 3D printing. Instead of the layer -by-layer, as is the current standard, the stereolithography-based system involves blasting volumetric image of light into a curing fluid or print chamber. The light on the target object creates a mirror image in the polymer, which reacts to the light and effectively sets in position. The rest of the fluid simply remains uncured and the newly formed object can be picked out of the chamber.

A replicator for the real world

It has been likened to a 3D photocopier and essentially it is the replicator of science fiction fame. With a solid object to copy, or even a 3D digital model, it can simply produce any shape required and complexity should not be an obstacle.

In the early designs, only the outer wall is solid. The interior is a lightweight honeycomb or other matrix design that saves weight and materials, while improving structural integrity.

Right now it is designed to work with plastics and will be able to create Disney merchandise at a mindboggling rate. If it can be harnessed and turned into a reliable method for other materials, or polymer technology advances, then this is a quantum leap for the whole industry.

Production time will be slashed

The simple time it takes to 3D print any object is the real obstacle to mass production. The creators of Mickey Mouse might just have swept that aside. In the early tests the printer has produced objects in minutes, instead of hours.

It doesn’t just save time, either, this process changes the whole method of production.

It’s all about support

Right now, if you wanted to print Goofy with his arms outstretched, you would need to print a support structure to hold the layers of the arms and hands. Not only does this increase the printing time, it also increases the costs and means you have to remove the support structure at the end before buffing or concealing any cut. Disney’s method eliminates this.

This is clearly a major issue for the company as it looks to mass market 3D printed merchandise, as it has beaten the issue twice. Another patent the company applied for is a 3D printer plate with freedom of movement, so that the plate itself forms the support for the overhangs when a traditional 3D printer is building the object one layer at a time.

Disney needs to protect itself from itself

Of course Disney could have created an issue for itself, and others, with the 3D photocopier discovery. It will be remarkably easy for fraudsters to simply copy merchandise using Disney’s own system.

So the makers of The Jungle Book, The Little Mermaid and Frozen have also applied for another patent for embedded identification in 3D printed objects that will allow originals to be easily identified. This will take the old-school hologram sticker to the next level and should be built into the structure.

The company’s R&D department has clearly been burning the midnight oil of late, as there are a number of other patents that clearly indicate that one of the world’s most potent merchandisers is going full steam ahead with 3D printing.

It’s a brave new world at Disney and the research and development arm is doing some amazing work that will go well beyond some printed plastic toys. We can’t wait to see how this technology affects the industry at large and we’re banking on it changing the face of 3D printing as we know it.