Skyscraper of Delivery Drones is possible future for Urban Delivery 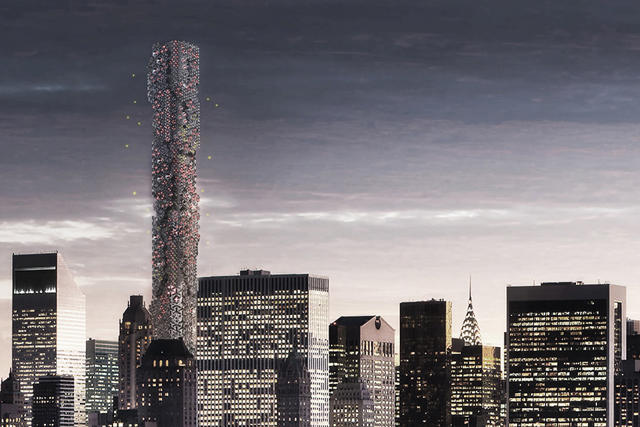 Amazon’s delivery drone testing have brought up many questions about the logistics of how to handle these machines. Like where will they be deployed? How do you extend the range to places farther away, and how will cities adapt to a constant frenzy of drones buzzing around.

Three architects recently ran a thought experiment around some of these questions, and their proposal, a speculative concept called The Hive, won second place in eVolo’s annual skyscraper competition. The design team—Hadeel Ayed Mohammad, Yifeng Zhao, and Chengda Zhu—imagined a tower that could serve as a drone docking station in dense cities. The honeycomb facade is constantly evolving, formed by the comings and goings of delivery drones, covered with mechanical panels that tilt to accommodate takeoff and landing.

But if you look beyond the renderings, a drone skyscraper doesn’t seem so crazy at all: It would create the large surface area needed to dock thousands of drones. It would let them come and go at various altitudes, alleviating traffic problems posed by drones moving through a single chute during busy hours. It would help companies create efficient traffic patterns in urban cores, where a centralized docking system might not be feasible unless it’s vertically oriented.

It also makes sense when you consider how retail is evolving for the on-demand economy. Amazon and Uber both want to deliver anything you want—at any time—and they aren’t alone. More and more we’re seeing catering-style businesses that forgo traditional brick-and-mortar stores in favor of private production facilities that produce and deliver their goods directly to consumers. David Chang’s food service Maple has no seats; it’s just a kitchen and a lot of drivers. Starbucks has moved into the Empire State Building with a similar approach: kill the counter and free Wi-Fi, and bring offices their coffee orders instead.

Considering The Hive through this lens, it’s easy to imagine many different on-demand services that rely on drone delivery, all stacked up in a tower, cooking meals and packaging goods like some hyper-efficient mall food court without a facade. Or—if you’re a little less optimistic about the future—cities in which all the buildings belong to Uber and Amazon, and everything else has been bombed into dust by endless waves of air-dropped Subscribe & Save boxes.