Micro-scallop robots can swim through your blood, eyeballs

A micro-scallop robot is only a fraction of a millimeter in size.

Simplicity is important when designing robots on the micro or nano scale (like, small enough to fit inside your body). There just isn’t room for complex motors or actuation systems. There’s barely room for any electronics whatsoever, not to mention batteries, which is why robots that can swim inside your bloodstream or zip around your eyeballs are often driven by magnetic fields.(Video)

However, magnetic fields drag around anything and everything that happens to be magnetic, so in general, they’re best for controlling just one single microrobot robot at a time. Ideally, you’d want robots that can swim all by themselves, and a robotic micro-scallop, announced today in Nature Communications, could be the answer.

When we’re thinking about robotic microswimmers motion, the place to start is with understanding how fluids (specifically, biological fluids) work at very small scales. Blood doesn’t behave like water does, in that blood is what’s called a non-Newtonian fluid. All that this means is that blood behaves differently (it changes viscosity, becoming thicker or thinner) depending on how much force you’re exerting on it. The classic example of a non-Newtonian fluid is oobleck, which you can make yourself by mixing one part water with two parts corn starch. Oobleck acts like a liquid until you exert a bunch of force on it (say, by rapidly trying to push your hand into it), at which point its viscosity increases to the point where it’s nearly solid.

These non-Newtonian fluids represent most of the liquid stuff that you have going on in your body (blood, joint fluid, eyeball goo, etc), which, while it sounds like it would be more complicated to swim through, is actually anopportunity for robots. Here’s why:

At very small scales, robotic actuators tend to be simplistic and reciprocal. That is, they move back and forth, as opposed to around and around, like you’d see with a traditional motor. In water (or another Newtonian fluid), it’s hard to make a simple swimming robot out of reciprocal motions, because the back and forth motion exerts the same amount of force in both directions, and the robot just moves forward a little, and backward a little, over and over. Biological microorganisms generally do not use reciprocal motions to get around in fluids for this exact reason, instead relying on nonreciprocal motions of flagella and cilia.

However, if we’re dealing with a non-Newtonian fluid, this rule (it’s actually a theorem called the Scallop theorem) doesn’t apply anymore, meaning that it should be possible to use reciprocal movements to get around. A team of researchers led by Prof. Peer Fischer at the Max Planck Institute for Intelligent Systems, in Germany, have figured out how, and appropriately enough, it’s a microscopic robot that’s based on the scallop: 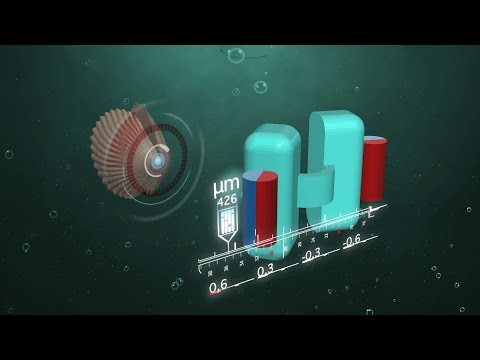 As we discussed above, these robots are true swimmers. This particular version is powered by an external magnetic field, but it’s just providing energy input, not dragging the robot around directly as other microbots do. And there are plenty of kinds of micro-scale reciprocal actuators that could be used, like piezoelectrics, bimetal strips, shape memory alloys,  or heat or light-actuated polymers. There’s lots of design optimizations that can be made as well, like making the micro-scallop more streamlined or “optimizing its surface morphology,” whatever that means.

The researchers say that the micro-scallop is more of a “general scheme” for micro-robots rather than a specific micro-robot that’s intended to do anything in particular. It’ll be interesting to see how this design evolves, hopefully to something that you can inject into yourself to fix everything that could ever be wrong with you. Ever.