Merging with our technology has made humans technological animals

Technological attachment is all around us.

The idea of merging with our technology has warily made its way into the mainstream. Often it’s couched in a combination of snark and fear. Why in the world would we want to do that? It’s so inhuman. (Video)

That the idea is distasteful isn’t shocking. The imagination rapidly conjures images of Star Trek’s Borg, a nightmarish future when humans and machines melt into a monstrosity of flesh and wires, forever and irrevocably leaving “nature” behind.

But let’s not fool ourselves with such dark fantasies. Humans are already technological animals; tight integration with our inventions is in our nature; and further increasing that integration won’t take place in some distant future—it’s happening now.

To observe our technological attachment, we need simply walk out the door. It’s everywhere, all around us—on the bus or train, at work, at home, in the bathroom, in bed—people gazing into screens, living digital lives right next to their ordinary ones.

In the Matrix, the experience is involuntary, a tool of control and oppression. In our world, it’s voluntary, and mostly about freedom, expansion, and expression. As Jason Silva recently noted, our devices augment our brains, like cognitive prosthetics.

In his latest video, Silva says we should go easy on those fervent fans lining up for the latest smartphone, “These are not trivial things, these are not fashion accessories—these are mindware upgrades.” The newest smart devices speed information processing, better organize our thoughts, more efficiently connect us with others. 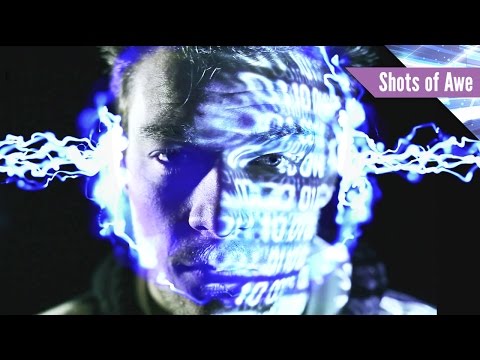 Silva says a simple telephone collapses time and geography in a kind of “technologically mediated telepathy” as termed by David Porush. Smartphones and other connected devices do the same thing, of course, and at very nearly the speed of light. But the word smartphone fails to convey that the phone part is far less than half the equation.

This isn’t a physical merger with technology, but it is surely a psychological one.

And this deepening union of brains and devices—Silva’s feedback loops and mindware upgrades—is just the latest round. Man has been “merging” with technology since the beginning. It’s more or less our modus operandi. We exude technology. We live in it. It lives in us.

So, why is the concept so foreign?

When technology is accepted and absorbed into the culture, we no longer think of it as technology. Consider the café I’m sitting in as I write. What do I see?

Plates, cups, utensils, backpacks as extensions of our arms, hands, fingers. Chairs and bicycles extend and augment our legs and backs. Clothes as prosthetic fur—in the name of modesty, but also for warmth, camouflage, or sexual signaling. Glasses are eye prosthetics. Newspapers, books, and notepads are cognitive prosthetics.

All this without noting the most obvious items—laptops, smartphones, and tablets. Why are these latter so much more obviously technological? Because the older the technology, the more completely we’ve incorporated it, and the harder it is to see.

This techno-blindness is apparent in the way we approve of some technologies and not others. Worrying about social networks and internet addiction, we ask, “Why can’t people just pick up the telephone or read a book?” Maybe one day we’ll lament how much time people spend in virtual reality—television was so much healthier.

Indeed, already computing technology is rapidly being assimilated. I’m hemmed in by people enthralled by their devices, absorbed in another world for the moment. And at this point, it’s perfectly acceptable to balance a sense of awe with a note of skepticism.

What’s the downside? Might we not lose ourselves in our own creations, misplace our moral compass and wander the trackless paths of digital addiction? No doubt.

But this isn’t a good reason to end technological experimentation.

We’re free to make our own decisions about how to use technology. If you find your smartphone annoyingly ever-present—ban it in the bedroom. Leave it in your pocket at dinner. Go surfing, climbing, or camping. Use it wisely, don’t let it rule you.

Perhaps even greater technological integration—contact lens displays, embedded medical devices, brain-computer-interfaces—will rob us of the voluntary “off switch.” But I don’t think so. If a new technology is more trouble than it’s worth, few will adopt it.

In the meantime, choose wonder over fear and take a moment to marvel at the times we live in. As Louis CK says, “Even the shittiest cellphone in the world is a miracle.”