What if devices could pull enough power wirelessly from the air to run themselves and send signals?

Mobile devices have become radically smaller and more powerful in the past 10 year. The list of tech-related tasks that the mobile devices we all carry around has grown longer by the year. The next step in technology’s great disappearing act? Absorption into our clothes, body, and environment.

The question of how best to power that next step, however, remains an open one.

Wearable and Internet-of-Things technologies need to be ‘on’ all the time. In the former case, taking something on or off for recharging—like a health monitoring device—causes data loss and increases the chances it won’t be used as much as it should or at all. And you don’t want to wire or charge sensors embedded throughout smart homes, offices, cities.

But what if these devices could pull enough power wirelessly from the air to run themselves and send signals? Sound like sci-fi? Not so according to a group of University of Washington engineers who are building a communication system called WiFi backscatter—the system powers devices using radio waves and connects them to laptops or smartphones over WiFi networks. 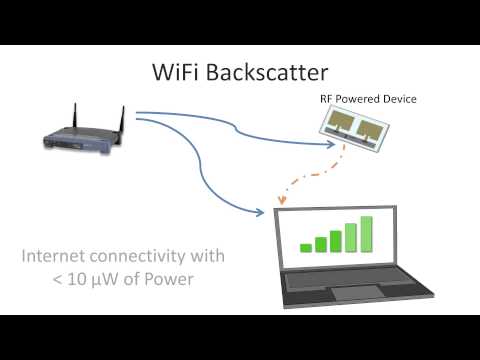 Previous research had shown it possible to run low-power devices off radio, TV, and wireless waves—the most recent work, however, took these devices a step further by allowing them to send their own signal using far less power than is usually required.

“If Internet of Things devices are going to take off, we must provide connectivity to the potentially billions of battery-free devices that will be embedded in everyday objects,”said Shyam Gollakota, a UW assistant professor of computer science and engineering. “We now have the ability to enable WiFi connectivity for devices while consuming orders of magnitude less power than what WiFi typically requires.”

How does it work? The team made a tag that listens for WiFi signals being sent from a local router to a laptop or smartphone and vice versa. The tag’s antenna encodes data by selectively reflecting or absorbing the signals. This selective reflection makes tiny changes in signal strength that can be detected and decoded by other devices.

Using this method, more powerful central devices like smartphones, tablets, or laptops can communicate with a range of low-power devices and sensors within about two meters and at a rate of one kilobit per second.

A pair of smart socks could, for example, relay data about your jog to a jogging app on your phone. Or temperature sensors throughout your house could communicate with thermostats to maintain an optimal temperature inside.

Joshua Smith, a co-author of an upcoming paper on the system and UW associate professor of computer science and engineering and electrical engineering, says that although the signals are tiny and could well be lost in noise, the devices in the system are able to detect them because they know which specific patterns to look for.

The team will present their findings at the ACM Sigcomm annual conference in Chicago. They are working to extend the system’s range to 20 meters, have filed patents, and hope to start a company based on the technology.

“Given the prevalence of WiFi, this provides a great way to get low-power Internet of Things devices to communicate with a large swath of devices around us,” Ranveer Chandra, a senior researcher in mobile computing at Microsoft Research, told the MIT Technology Review.