What if every object in your life could talk? A door handle warns you when someone has attempted to enter without a key. A desk ticks off your appointments when you sit down. A rubber duck quacks at a child in the tub, then his pillow sings him a lullaby to sleep. (Video)

This is the world envisioned by Disney Research, in the last paperinteraction designer Ivan Poupyrev published before leaving forMotorola (which was then absorbed by Google). In the paper, he and Yoshio Ishiguro demonstrate a method in which a speaker could be 3-D printed in any shape imaginable, and its entire surface–whether curvy or angular–would emit sound.

The technology seems like the stuff of sci-fi, but its roots are actually grounded in relatively simple but defunct, electrostatic loudspeaker technology that caused a brief ruckus in the 1930s. Basically, you print out an object. You snake a wire through it, carrying an electrical impulse of sound. Then you cover the object in electrodes, charging its skin with the potential to create sound.

If you touched the object in this unfinished state, you’d technically touch electricity, and you wouldn’t hear anything. But then, an insulating layer is added around the electrode, and then the entire speaker is finished with an outer skin that will vibrate to create sound. Technically this outer skin is 100% diaphragm–the same technology that shakes sound from your speakers. (In the past, Disney Research played with a similar idea totransmit sound through human touch.)

So pretty cool, right? Just imagine a mug that makes pithy comments about your taste in coffee!

The researchers came up with another trick for their technology. Their objects could make audible sounds, but they could also produce ultrasonic sounds–sounds that are too high for the human ear to hear.

An object that can produce a sound is very handy when mixed with a few microphones, because suddenly, software can triangulate the position of a dumb object in 3-D space. Additionally, a talking object can essentially say its name, identifying it to a computer. Couple these two ideas, and your phone or laptop could know the exact position of everything in your environment, from your salt shakers to your sofas. Computers can’t do that right now, so what app developers could do with that information remains to be seen. At the very least, you get into some very neat interactive home territory.

Now for the caveats: Disney’s prototypes were actually made by hand because they required a few different materials to create the speaker, and modern 3-D printers don’t handle multiple materials very well. But in the future, a 3-D printer could likely handle the job on its own.

Another thing to know is that the audible range of the speakers are pretty great for reproducing voices, the treble side of music, and those beeps and bloops of a computer, but they’re lousy for bass. So don’t toss out your Beats just yet. 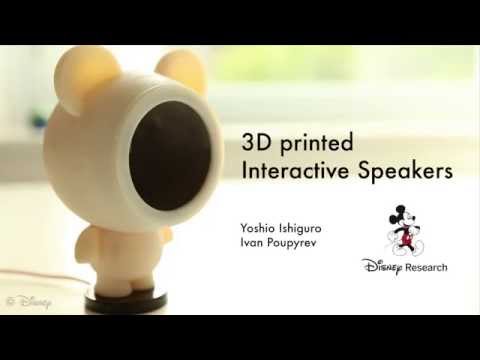