Mark Cuban invests in PowerPot, a pot that charges your smartphone by boiling water

The PowerPot is an awesome device that charges your phone by boiling water in a pot. The device has just become the next hot thing, thanks to its appearance on ABC’s hit reality show, “Shark Tank.” (Video)

The makers of the device snagged a $250,000 investment from billionaire Mark Cuban on the show that features inventors and entrepreneurs pitching to investors. They were initially offering to sell 10% of their company, Power Practical, for that sum — a $2.5 million valuation.

The company has sold about $300,000 worth of PowerPots, the founders said. When they said they expected sales to zoom to $2 million, they got a round of laughter from the investors on the show.

That laughter didn’t deter Cuban, who took to Twitter later saying, ”Notice how the other sharks are confirming my value #Shark Tank.” (Tweeting is a big part of the “Shark Tank” show.)

Among its other accomplishments, PowerPot was the winner of the 2012 DaVinci Inventor Showcase.

PowerPot is being marketed toward campers, but it earned Cuban’s investment when the founders talked about selling it to developing countries like Uganda. That’s a potentially huge market for the device, where local villagers in test markets are using it to light their huts.

Business Insider’s Dylan Love tested the $149 PowerPot and it worked well. He wrote:

“The model we tested generates 5 watts of electricity, which means it’ll charge your iPhone twice as fast as connecting it to your computer over USB. There’s also a 10-watt model for those who want to be extra-prepared.”

Here’s a video of the PowerPot in action, being pitched on Shark Tank. 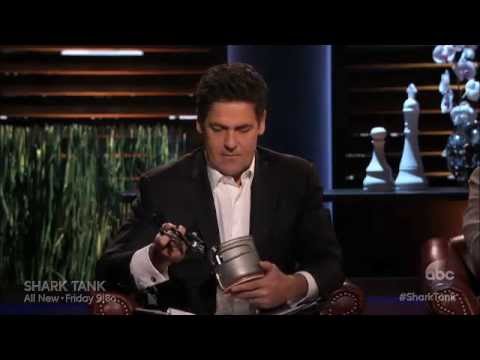