The Air Hockey Robot, developed by Jose Julio out of some spare 3D printer parts and a PS3 camera, is a tough competitor to beat. The robot uses its camera and an Arduino Mega to correctly predict the trajectory of the puck, even when it’s rebounding haphazardly across the table. With freedom of motion on two axes, the robot can even predict how best to return your last futile attempt to score against its robo-defense. (Video)

Losing to a robot at a game meant for us high-and-mighty humans isn’t exactly the most rewarding of experiences, and Julio knows it. if you’ve taken enough lumps and just need to score an ever-loving shot against his robot, Julio has made the robot’s strategy algorithms and its reaction speed adjustable to make the game more winnable. We’re not sure that there isn’t an element of cheating to dumbing down your opponent to get the win, but in this particular battle of man and machine, maybe the robot should learn to “let the wookie win” every now and again. 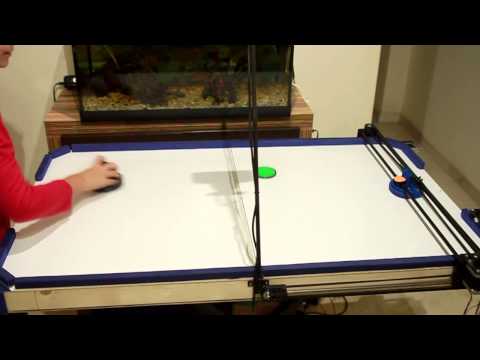