There has been unbelievable flooding going on in Colorado. The rain has made it difficult (or impossible) for airplanes and helicopters to get in and out of the area. Drones can fly in and out, though, and while they’re not able to pick up people or drop off supplies, they are able to make damage assessment maps to help relief agencies coordinate their efforts. Or at least, they were, until the U.S. Federal Emergency Management Agency (FEMA) showed up and grounded them. (Video)

Falcon UAV is a Colorado company that makes a fixed-wing UAV (called a Falcon) that uses GPS and cameras to autonomously generate (among other things) highly accurate maps of the ground. The UAV is hand-launched, with an endurance of about an hour, and generally operates between 300 and 1,500 feet above the ground. It has public safety flight approvals from the Federal Aviation Administration (FAA) to fly in some parts of Colorado. Basically, the point here is that we’re not talking about some random dude with a quadrotor flying around taking pictures: the Falcons are designed for (and governmentally approved for) mapping missions in public airspace. 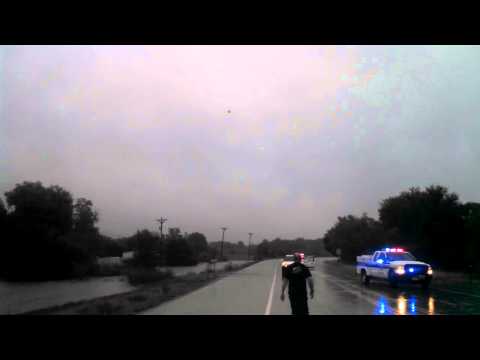 For the last three or four days, Falcon UAV has been volunteering with the Boulder County EOC (Emergency Operations Center) to coordinate mapping flights around the towns of Longmont and Lyons, just northeast of Boulder. This is the kind of thing they end up with, with a turnaround time of just a few hours from launching the drone to delivering a high resolution, georeferenced map:

It’s tiny, I know, but you can see a subset *.gif here and download a full version for Google Earth here.

So yeah, it seems like that would be kind of handy to have, especially since the UAVs can fly even when manned aircraft are grounded by weather, like last Thursday afternoon when the Falcon was the only aircraft that managed to get into the air at all.

And then, over the weekend, FEMA showed up. Falcon UAV tells the story on their blog:

Early Saturday morning Falcon UAV was heading up to Lyons to complete a damage assessment mapping flight when we received a call from our Boulder EOC point of contact who notified us that FEMA had taken over operations and our request to fly drones was not only denied but more specifically we were told by FEMA that anyone flying drones would be arrested.  Not being one to bow to federal bureaucrats we still went up to Lyons to do a site survey for how we can conduct a mission in the near future to provide an adequate damage assessment to this storm ravaged community.

While we were up there we noticed that Civil Air Patrol and private aircraft were authorized to fly over the small town tucked into the base of Rockies.  Unfortunately due to the high terrain around Lyons and large turn radius of manned aircraft they were flying well out of a useful visual range and didn’t employ cameras or live video feed to support the recovery effort.  Meanwhile we were grounded on the Lyons high school football field with two Falcons that could have mapped the entire town in less than 30 minutes with another few hours to process the data providing a near real time map of the entire town.

[...] We are very disappointed in FEMAs response to actively prevent the use of UAVs and drone technology when these services were offered for free and at a time when manned helicopters could be used for more critical missions such as evacuations and high mountain search and rescues in inaccessible communities.

Sigh. It’s unfortunate that the government seems more than willing to employ UAVs when it comes to military, police, and security operations, but when drones have a chance to go some tangible public good, the reaction is all of a sudden there’s this panicked “new technology is scary and bad” response. This is part of the reason why drones have such a bad rap: it’s not that they can’t be used for helpful things, it’s just that in this social and political climate, it’s much much harder.

We should stress that we don’t have FEMA’s side of the story on this, and it’s entirely possible (even likely) that there’s more going on that we know about. But it’s also hard to dispute the facts, which are that Falcon UAV was actively assisting Boulder EOC with valuable information until FEMA showed up and told them to stop. Honestly, I hope that somehow there’s more going on, because if not, then the only thing we have to blame is bureaucratic inertia, which is small comfort to the people in Colorado who Falcon UAV could be helping right now.

We’ve asked FEMA for comment, and we’ll update this article if we hear back.