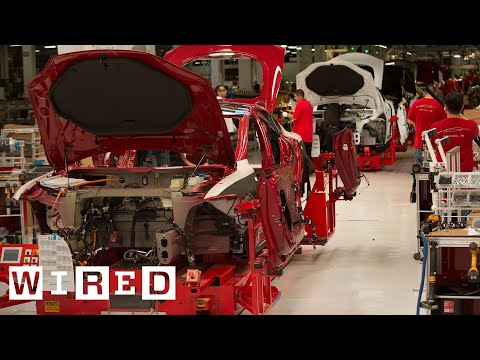 The conceptual Hyperloop transit system by Elon Musk imagines shuttling passengers back and forth between Los Angeles and San Francisco in an insanely fast half hour.  It might be the futuristic transport system of the moment. Yet it’s the billionaire’s other ventures, like SpaceX and Tesla Motors, that continue to make real technological strides.

Wired managed to score a hypnotizing behind-the-scenes peek at Tesla’s Model S factory in Fremont, Calif., where 3,000 humans and 160 high-tech robots of all shapes and sizes work in tandem to crank out 400 new electric cars every week. The sedan’s individual parts are literally stamped into place from heavy sheets of blank aluminum before the vehicle is assembled by a nimble fleet of robots, which, according to Wired, perform “an intricate ballet that is mesmerizing to behold.”

“We are building the future here,” they say, nearing the assembly line’s end. No kidding.