Falling bridges and the decline of U.S. infrastructure spending 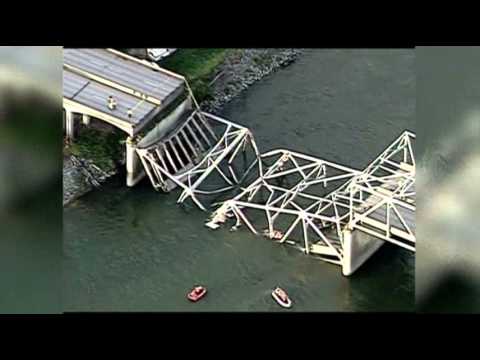 … and as a share of the economy, it’s at a 20-year low (the lowest on record with St Louis Fed data).

Our construction budget has been the victim of deficit fears, but it’s the infrastructure deficit that’s truly absurd.

Our expensive transportation and utility challenges absolutely aren’t going away, but our window of opportunity to cheaply fix them absolutely will. Roads, rail, airports, broadband, electrical grids … repairing or building out these systems is a matter of inevitability and U.S. interest rates and labor costs will only go up as the economy recovers.

The average age of America’s 607,380 bridges is about 42 years old. The Federal Highway Administrations claims we’ll need to spend about $20.5 billion annually for the next 16 years to properly update them — about 60 percent more than we’re spending every year today. Meanwhile, the Highway Trust Fund has been slammed by a decrease in miles driven nationally, states and cities have been slammed by the weak economy, and private builders face a jumbled knot of “municipalities, investors, and federal overseers.”

For a rich country like the U.S., the beauty of the federal government borrowing in its own currency is that you can finance huge deficits when the economy stinks and use that money to fill the gap left by the private sector and state and local governments. Infrastructure improvements — the shared responsibility of all levels of government and the private sector — are the perfect recession-time gift from Washington. States and local governments are pulling back because they have to. Washington is pulling back because it chose to.

My response is two-fold: (a) they’re all right; and (b) so is the argument that Washington should be spending more on infrastructure. America’s rebuilding needs aren’t going away. The basement-bargain price of rebuilding America is. Unfortunately, we might have to wait for a bridge collapse to inconvenience a member of Congress before infrastructure spending is rescued from austerity. Then, perhaps, we’ll finally take advantage of the best deal on the market.