A DIY bioprinter that can print living cells

3D printers have been used to print iPhone cases, gun parts, even chocolate candies.  Now biohackers, a group that meets at BioCurious, a community biology laboratory in Sunnyvale, California, has created a do-it-yourself inkjet printer that can print living cells. (Video)

Not everyone is comfortable with the idea of the biohacker movement (see “Doing Biotech in My Bedroom”), whose aim is to tweak everyday technologies and make it affordable and easy for anyone to manipulate DNA, cells, and other of life’s building blocks. The far-fetched possibilities ring too close to bad science fiction. Other skeptics think these bio-tinkerers won’t produce much more than elaborate science fair projects.

But after a conversation with Patrik D’haeseleer, a bioinformatics researcher at Lawrence Livermore National Laboratory who moonlighted as organizer of the DIY bio-printer project at BioCurious, I saw why it’s important to encourage more people to play around with biology. These hobbyists could one day make important contributions to the biotech field. Apple and Microsoft were born in garages, too.

This DIY bio-printer took some trial-and-error to create. After dismantling an HP 5150 inkjet printer and later deciding to instead build an inkjet platform from scratch, D’haeseleer and other volunteers successfully put together the bio-printer for about $150. Their first model only works in two dimensions—to demonstrate, they printed a sheet of fluorescent E. Coli cells to read “I ♥ BioCurious” over and over again. 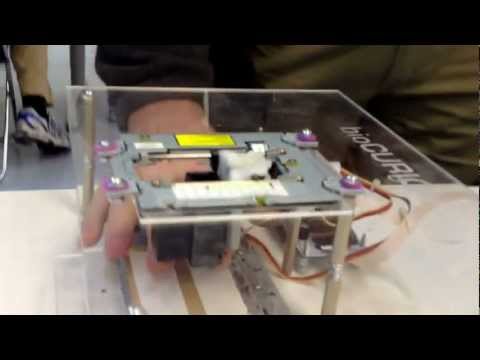 To me it means that even if today’s biotinkerers don’t create the next Microsoft or Apple, they might just spark the curiosity of someone else who will. The BioCurious group has posted a detailed how-to guide to make the bio-printer on the website Instructables.