Indonesians lay across railroad tracks in the belief the current wil cure them of their illnesses.

Despite the danger and the efforts by authorities in Jakarta to halt the craze, Indonesians with illnesses have been lying down across railway lines in the mistaken belief that a low-voltage electric current in the tracks will cure them as it passes through their bodies. (pics and video)

Adults and children have been lying between the rail lines – neck on one, ankles on the other – confident the current will banish their illnesses even as trains thunder past on nearby tracks. 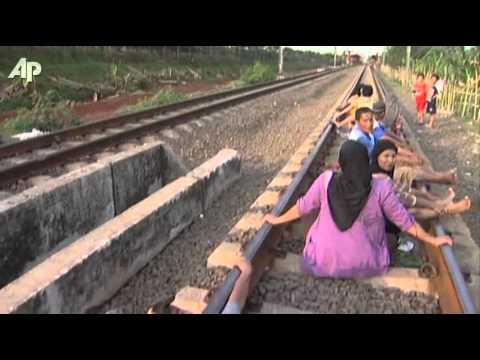 But there is no electricity in the rail tracks, only a lethal high voltage in the overhead lines that power the trains.

Rail authorities in the capital have erected signs warning of the dangers of the fad, and threatened penalties of a three-month jail term and fines equivalent of £1,200, for those who flout the ban on the practice. “We have repeatedly urged them not to do it because it is very dangerous,” said railway spokesman Mateta Rizalulhaq.

However, people have carried on regardless, spurred by stories of the ethnic Chinese man who started the craze.

The disabled man had lain down on the tracks to commit suicide, but claimed the “track therapy” had instead cured him.