A wave disk engine is essentially just a disk with a bunch of channels cut into it that spins around super fast. The center is hollow, and portions of the inside and outside edges of the rotor are alternately sealed off and opened up as it rotates. As shock waves from the rotation compress and ignite fuel in the channels, the rotor spins, and if you hook the back end of it up to a generator, you get electricity.

Confused? No problem, here’s a helpful diagram from New Scientist:

According to Michigan State University, who has been working on this technology, a wave disk engine is 3.5x more fuel efficient than a conventional combustion engine. This seems like a crazy improvement, but since a piston engine only turns about 15% of its fuel energy into forward motion, a threefold increase isn’t out of the realm of possibility. Also, a wave disk engine doesn’t need most of that random stuff that you find under the hood of your car, and would end up at about 20% lighter and way, way cheaper to manufacture. Like, $500 OEM price for a wave disk generator that could power a car. And, it will also run on anything that burns, from gasoline to natural gas to hydrogen. Oh, and also, it emits 95% less carbon dioxide.

Like all turbine-type engines, the wave disk engine is probably only able to provide high levels of efficiency when it’s operating at its optimal speed, meaning that you’re not going to see this thing hooked up directly to the wheels of your car. Instead it’ll be charging batteries, so that you can have as much power as you need, when you need it, without compromising the engine’s peak efficiency.

Michigan State’s engineers have a prototype wave disk generator in action, and they hope to have a car-sized 25 kilowatt version running by the end of the year. With a recent $2.5 million from the Department of Energy, it might even happen. 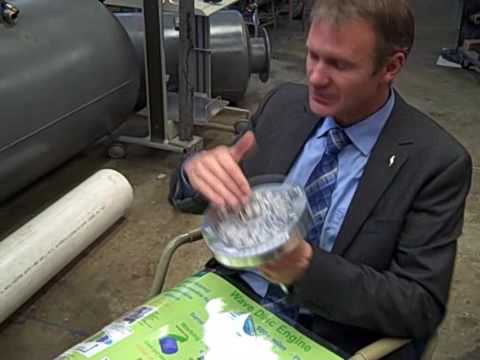