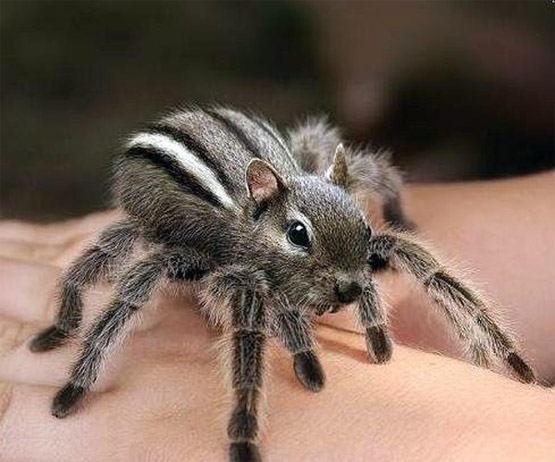 Little Howie didn’t mind that he was part of a failed genetic experiment. He was determined
to get people to like him even if it took every fuzzy leg on his body

The photos this week tend to be geekier than normal. In fact, they come in around 7.8 on the “geekter scale”. To some that may be alarming, but its still fun to make fun of geeks… well, unless you are one, and have numbers constantly running through your head, and wear your lipstick in the inside of your lips, and still laugh at all the wrong things… then, we kinda still want to make fun of you. Because of the Reindeer strike in 1986, Santa kept this baby in reserve Finally, a solution for the stupidest key on the keyboard – the Cap Lock Key To the locals, it became known as the “Cold Day in Hell Church” “Don’t make me angry. You won’t like it when I get angry!” His head was enormous, and his feet were ready to take on Godzilla, but as a
2 months old, he still had the body of a teddy bear Geek tools, geek fashionwear, geek entertainment! Can the end be far away? It wasn’t so much that he was tall and ugly, and from a totally different species,
but Sarah was taken by the fact that he was a perfect match on eHarmony.com He knew it was a mirror, and he knew he was playing himself, but in the world of
chess, these were simply excuses for not winning It was after this experience that Jerry knew he had to invent hamster
treadmills, hamster stepper machines, hamster ab crunchers,
and hamster thigh masters

The person sounded very desperate, but the confusing part was that John never
knew exactly where his server was, so how would he know if it ever got returned It became known as the Norwegian Privacy Sock, and other than the fact that
you breathed in your own air and passed out a lot, it worked pretty well

For Randall Patrick Munroe it was a total act of defiance. But for Verizon, it was
just another funny payment in their daily ritual of screwing their customers As usual, Wilbur tried to lay claim to the zoo Christmas tree “Patience is required when hunting humans.
If you harvest them at the wrong time they taste like crap.” (Submit your caption below)