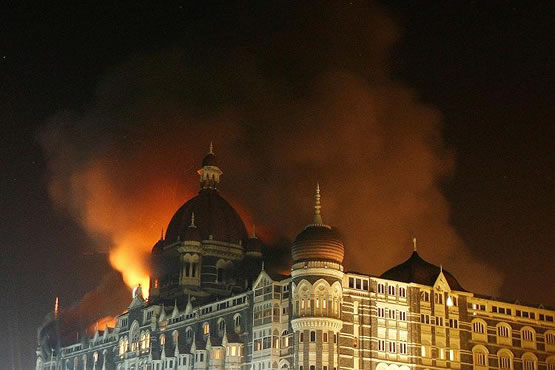 At least 101 people have died in the attacks, and parts of Mumbai are still under siege

The sudden and coordinated attacks by Islamist gunmen in Mumbai on Wednesday continue to grip the Indian city on Thursday. The “Deccan Mujahideen” have claimed resonsibility, but no one seems to know if the group is homegrown or linked to a wider international network.

Explosions were heard even after a hostage standoff ended at Mumbai’s Taj Mahal Palace hotel on Thursday morning, and another hotel was still under siege as the city reeled from a coordinated terrorist assault which has killed 101 people and injured over 300.

Police were searching the Taj Mahal Palace room by room at about 10:30 on Thursday morning, according to the BBC, but by 11:15 witnesses reported hearing new explosions from inside the hotel, which was already burning from a suspected grenade explosion on Wednesday night. Other witnesses reported explosions at the Trident/Oberoi Hotel and the Nariman House, a Jewish center in Mumbai. All three buildings — targets of a terrorist assault on Mumbai on Wednesday — had been entered by Indian military commandos, according to Indian media.

Islamist gunmen had arrived by boats and invaded at least 10 “soft targets” on Wednesday evening, including the Jewish center, the two hotels, the landmark Café Leopold, hospitals and a railway station, where they sprayed commuters at random with bullets. Hostage standoffs at the Taj Mahal and Trident/Oberoi led — even hours later — to gun skirmishes with police and, at the Taj Mahal, images of a fire. Indian soldiers take their positions outside the Taj Hotel, where on Thursday gunmen were still holding guests hostage. The mood among security forces is tense. With the attackers still holed up in several luxury hotels, its unclear how many hostages remain at risk. This is video still of a man presumed to be one of the terrorists. A group calling itself Deccan Mujahideen has claimed responsibility for the late night assaults. The terrorists were heavily armed with assault rifles and grenades. Reports suggest they started shooting wildly as they stormed various target-locations in their coordinated attack. Troops from the Indian Central Reserve Police Force were out in force on Thursday in Mumbai.

Indian bystanders and media representatives take cover in front of the Taj hotel, responding to a volley of gunfire. Firemen try to douse a fire at the 5-star Taj hotel. The scenes of destruction have turned the city into a battlefield. Footage from Indian TV station of a car destroyed in the attacks. In addition to the 101 reported fatalities, at least 250 people were wounded. A policeman takes stock of the bloody aftermath of the attack at the train station. The attacks have claimed many victims. Here a policeman is helping a wounded child. The attacks seem to have been aimed at western tourists visiting India’s financial capital. Some of the injured are being transported out of the attacked hotels on luggage carriages. Crowds have been gathering around to witness the live battles between the police and terrorist gunmen. Police stand guard at a train station in downtown Bombay. Police stand guard as investigators look for evidence to get a fuller picture of what has happened.