The Ryugyong Hotel resides in N. Korea. Work began in 1987 and was abandoned in 1992. At 105 stories, with 7 revolving restaurants, it would have been the tallest hotel in the world. However, word has it that is suffers from crumbling concrete, problems with the elevator shaft, and funds to complete it. Video after the jump. (Pics) 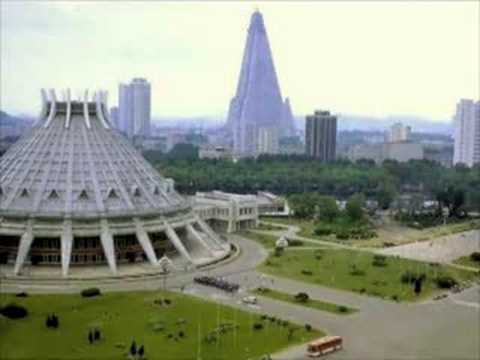 Under the personality cult of leaders Kim Jong-il and his father Kim Il-sung, North Korea has become fiercely isolationist, nationalistic, and totalitarian. Despite being one of the planet’s poorest countries, the communist state looks for any achievement to boost itself in eyes of the world. Its people know little or nothing of other nations except for the fact that Democratic People’s Republic of Korea (DPRK) is vastly superior. The DPRK is also one of the world’s most secretive nations. For a North Korean, contact with a foreigner can land one in jail… or worse. But there is one embarrassing secret that is hard for the government to hide, literally. It’s the Ryugyong Hotel in the Potong District of North Korea’s capital city of Pyongyang. It’s difficult to hide because it’s a massive, 105-story structure which dominates the city’s skyline. It’s an embarrassment because it’s a complete engineering failure… its empty, dilapidated husk lurks over the capital, mocking the citizens of the proud country. The hotel’s story begins in 1987, when the North Korean government began construction at an estimated cost of $750 million, or 2% of the country’s gross domestic product (GDP). By comparison, 2% of the United States’ GDP would be about $220 billion. Construction of the hotel was a cold war response to other massive skyscrapers in Asia, most notably South Korea’s towering Stamford Hotel in Singapore. The North Koreans expected the project to bring in western investors as a first move into their nation. Investors were told to expect little oversight, and assured that casinos, nightclubs and lounges could be added. The North Korean government was so proud of the project that they added it to their official city maps before the project was even started, and they issued postage stamps touting the hotel before it was even half-finished.

The Ryugyong or “Capital of Willows” Hotel stands 1,083 feet tall, and it was planned to have 3,000 rooms and seven revolving restaurants. It has a total of 3.9 million square feet of floor space. The hotel would be the tallest hotel and seventh largest building in the world if it were finished. It would also have been the first building with over one hundred floors outside of New York or Chicago. The first event scheduled to be held at the hotel was June 1989′s World Festival of Youth and Students. The hotel was nowhere near ready for that event. Its construction was plagued with problems, and after five years construction completely ground to a halt due to a shortage of everything… especially funding and electricity. Work on the hotel has never resumed; the project was abandoned, leaving a lonely construction crane perched on its peak.

Pyongyang SkylinePyongyang skyline, showing the Ryugyong Hotel on the top right.The shell of the building is complete but it has not been certified as safe for occupancy. There are no windows, fixtures, or fittings. The extremely poor quality concrete used in its construction has left the building sagging to such a great degree that the structure can never be finished without a massive overhaul.

The North Korean government is still looking for foreign investment, hopefully around $300 million. It’s going to be hard to find such an investor considering the DPRK has such a tight stranglehold on visitors coming to their nation. The DPRK only allows about 130,000 tourists in an entire year, and almost none of them come to Pyongyang. To make matters worse, the nation appears to be in a never-ending drought and famine cycle that is not conducive for the operation of a five-star hotel.

Today, few North Koreans are willing to discuss the hotel with outsiders. The hotel, which was once found on city maps before the construction even began, has now been completely stricken from the official maps. Tour guides usually claim not to know where it is. Either a majority of the country is in a state of denial about the whole thing, or they avoid the subject for fear of reprisal. Since the government’s embarrassing monument is visible from practically every point in the city, it’s most likely the latter.

Maybe someday North Korea will become a popular tourist destination, but not in the foreseeable future. If they ever do, there could be plenty of vacancies waiting for the throngs of outsiders… assuming some investors are willing to risk a third of a billion to reanimate the Ryugyong Hotel’s rotting corpse.