Damien Hirst posing in front of “The Golden Calf”

British artist Damien Hirst entered the record books on Monday after an unprecedented auction of his works raised £70.5 million ($158.75 million) with more than 160 lots still to be sold. (Pics) 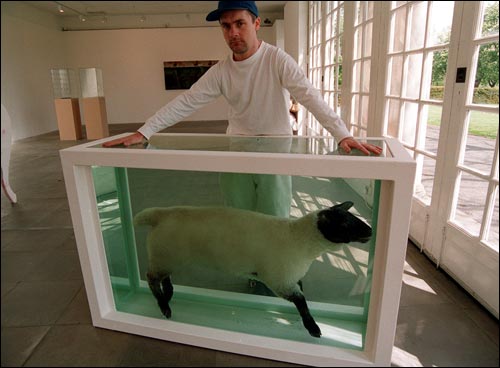 “Away from the Flock”

Sotheby’s auction house in London said that after 56 of the total 223 lots were sold yesterday – the first of two days of sales – it had made a spectacular £70.5 million, more than the £62.4 million top estimate for the evening. The auction, entitled Beautiful Inside My Head Forever, broke new ground as the first time an artist has sold a bulk lot of work directly, bypassing art galleries who charge commission of up to 50 per cent of the sale price. 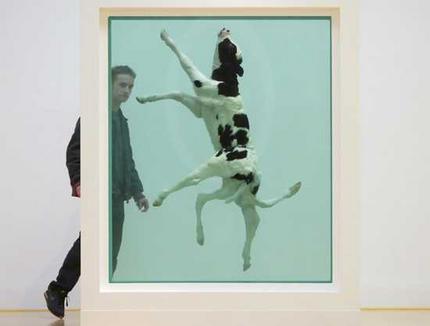 Monday’s auction also represented a new record for a sale dedicated to one artist, Sotheby’s said – it beat the previous record set in 1993 for 88 works by Pablo Picasso, which went for a total of $US20 million ($25.1 million). And it proved there is no shortage of art buyers even in the current economic gloom, which hit new lows yesterday after the collapse of US investment giant Lehman Brothers plunged the financial markets into turmoil. “I think the market is bigger than anyone knows,” Hirst said after the sale. “I love art and this proves I’m not alone and the future looks great for everyone!” The top selling item was The Golden Calf, where Hirst returned to the style that made him famous and put a real calf in a tank of formaldehyde, adding 18-carat gold hoofs and horns and a gold disc on its head. It had been estimated at between £8 million and £12 million, but in the end sold for £10.3 million, establishing a new record for a Hirst work at auction. Another highlight was The Kingdom, a tiger shark in formaldehyde, which easily beat its estimate of £4 million to £6 million by selling for a spectacular £9.5 million. Although the preserved animals were out in force, the collection – which Hirst has said was “probably the most amazing show I’ve put on” – also expanded on his other classic themes, including butterflies and spot paintings. Hirst, 43, is already one of the best-selling modern artists in the world, but Sotheby’s said the unconventional auction and 11-day pre-sale exhibition – which attracted 21,000 visitors – had clearly paid off. “The auction and exhibition have very clearly broadened the market place for Damien Hirst’s work, which is a very significant accomplishment,” said Sotheby’s specialist Cheyenne Westphal. Last year the artist, who works with a team of about 200, sold a platinum skull encrusted with 8601 diamonds for £50 million in a private sale. It is thought to be the world’s most expensive piece of contemporary art.