It looks like a box, but this robotic box is set to revolutionize the strawberry industry

Oldster farmers in Japan face increasingly tough times – few younger Japanese are willing to go into agriculture, and finding a successor to help out on the farm can be very difficult. Video after the jump. So robots are being developed as power suits – and as fruit pickers. In Utsunomiya, Tochigi Prefecture, venture firm Romobility Youto is working on a robot that can perform the labor-intensive task of picking strawberries, and at least one farmer is enthusiastic, Nikkei Net reports. The robot moves through a greenhouse scanning the strawberries with its color-sensitive camera eye. 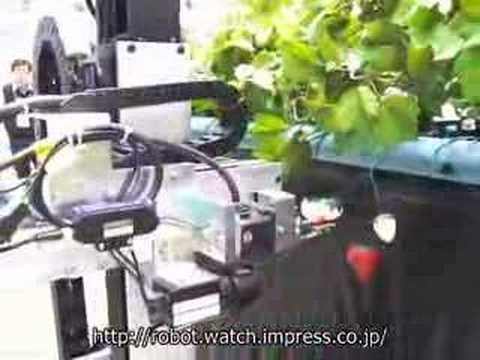 When it detects a ripe one, its arm reaches out to cut the fruit and place it on a tray. Ambient light doesn’t affect performance.“Measuring… Oh, I found one. Starting to pick,” Nikkei quoted the machine as saying. It’s still pretty slow, picking only one berry every ten seconds.Still, the farmer who owns the greenhouse was sanguine.