Increasingly, a new study shows, U.S.-born Asians and Hispanics are choosing to wed foreign-born members of their own ethnicity. At the same time, greater numbers of new immigrants are marrying among themselves. 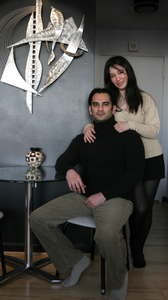 Zaineb and Faizal Zekeria don’t look like the living evidence of a potentially nation-altering trend. They look like two newlyweds in love.

But their year-old union is hand-holding proof of how a massive influx of immigrants is changing who marries whom, and why, and challenging the idealized notion of America as a multicultural melting pot.
Increasingly, a new study shows, U.S.-born Asians and Hispanics are choosing to wed foreign-born members of their own ethnicity. At the same time, greater numbers of new immigrants are marrying among themselves.
Some sociologists believe the shift could have significant implications: It could signal a widening gap between the races. Or, in another view, it could reflect growing pride among minority peoples.
There’s no question what has fueled the trend. The 11 million immigrants who arrived in the 1990s dramatically increased the same-ethnicity pool of potential mates. Hispanics are the country’s fastest-growing minority group, Asians the second-fastest. That is true in Pennsylvania and New Jersey.
The rationales for choosing a husband or wife of the same background, say couples interviewed for this story, are practical and emotional. Having a foreign-born mate offers an American a deeper connection to his or her ancestry. The opposite also occurs, with American partners helping to ease their spouses’ transition to a new world.
The former Zaineb Ainuddin, 29, and Faizal Zekeria, 30, found both to be true. She was born in Chicago, he in Bombay, India. The Center City couple met in 1997 as undergraduates at Temple University.
"I’d consider myself brought up in an American household," said Zaineb, whose father arrived in the States in 1965, when he was 37. "I was the unusual one who broke away and married an Indian."

The number of interracial marriages in the United States has been growing since the 1970s. Now two researchers, Zhenchao Qian, a sociologist at Ohio State University, and Daniel Lichter, a policy analyst at Cornell University, have documented an important change.
Using census data from 1990 and 2000, Qian and Lichter identified "unprecedented declines in intermarriage with whites, and big increases in marriages between native- and foreign-born members of Asian and Hispanic ethnicities." Their study findings were recently published in the American Sociological Review.
In 10 years, the percentage of Hispanics who married outside their ethnicity fell to 19.9 from 26.9. The decline among Asians was even greater, 33.2 percent compared with 41.7 percent.
Meanwhile, among marriages between people of the same ethnicity, pairings between native- and foreign-born rose 50 percent for Asians and 9 percent for Hispanics.
Scholars wonder how the trend could affect race relations. For decades, Lichter and Qian note, people have tended to view rising rates of intermarriage as a sign of growing acceptance between peoples of different color and culture.
"You could argue that recent immigration is creating a kind of balkanization," Lichter said.
Others say the decline in intermarriage is a non-issue.
"Most people prefer to marry someone with whom they have a lot in common – heritage, culture, values, customs, habits, language and appearance," said B.J. Gallagher, an L.A. sociologist who specializes in diversity issues. "It’s not a bad thing. It’s a natural thing."
Marc Lamont Hill, who teaches urban education at Temple University, sees the increase in same-culture marriages as "absolutely a good thing."
"We’ve been taught that white people, and particularly white women, are the standard for beauty and attractiveness," Hill said. Marrying within ethnicity is a way of moving beyond that, he said.
Debbie Wei, who was born in New York, raised in Upper Darby, and now is principal of the Folk Arts Cultural Treasure School in Philadelphia, said that when she was growing up, "there was a lot of pressure not to date Asian men. Some of it was internalized racism."
Back then, in the late ’60s, the Asians she saw in the media were cartoon figures like Hop Sing, the Cartwright family’s cook on Bonanza, or exoticized sexpots like Suzy Wong.
It was during a trip to Hong Kong, taken to recover her lost language and culture, that she met the man she would marry, Ming Chau. The couple, both about to turn 50, celebrated their 25th anniversary this year.
Chau said he never imagined he might wed an American, and never saw Wei as being one.
"I didn’t think, ‘She’s foreign-born,’ " he said. "She’s Chinese."

Nicholas Torres was born and raised in Santa Fe, N.M., home to a large Latino community, but he spoke mostly English at home.
"In my parents’ generation, culture was what you grew up with, it wasn’t something you sought," he said. "In my generation, it was something you lost along the way."
Torres, 36, is president of Congreso de Latinos Unidos, a leading Philadelphia social-services agency. Three years ago, he married a woman born in Colombia, prodded partly by "my thirst for connection, for a more in-depth connection to Latino culture."
Paula Navas, 33, who had been in the country about seven years, said she was attracted to Torres for more than his intelligence and good looks.
"He could understand my culture," said Navas. "None of the things I did or said were weird to him."
Yet differences abounded. For instance, the American concept of "family" generally encompasses mother, father, sister, brother, she said. To a Hispanic, it includes aunts, uncles, cousins, distant relations.
"The American mind-set and Latino mind-set are just different," Navas said.
Torres has noticed that while his wife’s ties to Hispanic culture are strong, and his have strengthened, the influence of U.S. society is inescapable.
"The longer she’s married to me, the more Americanized we become," he said. "We still eat arepas, but maybe a little less, hamburgers a little bit more."

Zaineb Ainuddin-Zekeria’s mother was of German descent, raised in Milwaukee, but she embraced the customs of her Indian-born husband. She converted to Islam and taught the religion to her daughter.
Zaineb’s father encouraged his daughter to assimilate, suggesting she use her more American middle name, Cordelia.
When she was a girl, imagining whom she might marry, Zaineb saw herself with someone who was like, well, herself. With a man from an Indian background, she wouldn’t always have to explain – her dress, her food, her prayers.
For Faizal, who came to the country in 1995, the idea of marrying a woman of his choice was initially out of the question. His grandfather is a big landowner, and Faizal expected to enter an arranged marriage with a bride of similar stature.
But, Faizal said, he didn’t look forward to a traditional Indian relationship, in which he would reign as unchallenged head of the household.
"I wanted a wife who would be more of an equal," he said.
Even after falling in love with Zaineb, he wondered if the match was right. As the eldest grandson, he carried a weight of familial expectation. To select his own wife, an American, was "a big step, a huge step, for the whole family."
"I couldn’t see myself getting married to [someone like] her sister, though she’s great, because she’s too American," he said. "Zaineb has made the effort to keep in touch with her Indian side."