In the fish markets of Asia, the tailfin from a basking shark can fetch nearly $10,000 (£5,250), a price tag justified not by its nutritional value, but its desirability as a vast sign on which restaurants can advertise their shark fin soup.

Demand for the delicacy is rising fast, and at up to $100 a bowl, fisheries around the world are in open competition to supply more than 10,000 tonnes of fins to Hong Kong, China, Taiwan, Japan and Singapore every year.

But British conservation groups warn that the high market value of shark fins is fuelling the outlawed practice of "finning", where sharks are hacked with machetes to remove their fins, often while still alive, before the carcasses are dumped overboard. The bodies, worth less to the market than fins, are discarded because they can contaminate other catches and take up valuable space in the hold.

According to the conservationists, finning is exacerbating a crisis in global shark populations, some of which have already plummeted by more than 90% since the advent of industrialised fishing. Records from fisheries published in 2003 revealed that numbers of thresher sharks have fallen by 75% in just 15 years through overfishing.
Sharks are unusually sensitive to fishing because their populations grow so slowly, a consequence of reaching sexual maturity late and producing few young.
One problem conservationists face is that sharks have such a bad public image, said Uta Bellion of Shark Alliance, a coalition of conservation groups. "Sharks have been ignored, not least because people are often scared of them. We all remember Jaws and what that did to a whole generation," she said.
Finning was made illegal in Europe in 2003, but yesterday the Shark Alliance warned of moves to soften already lax laws that will effectively render the ban obsolete. By relaxing legislation, fisheries would be able to practise substantial finning legally, a move conservationists believe will push some species, many found off the British coast, towards extinction.
The majority of sharks caught for their fins are the blue sharks, threshers and hammerheads of more exotic waters, but North Atlantic species, including the porbeagle, angel, shortfin mako and spiny dogfish – sold in British fish and chip shops as rock salmon – are also under threat.
Vessels fishing off the coast of Britain and in other European waters can legally slice fins off sharks to help store the bodies onboard, but to ensure they do not engage in finning, they can only sell fins weighing up to 5% of the total catch – a figure based on the assumption that 5% of a shark is its fins.
But the Shark Alliance claims the law is flawed and unscientific. Studies show the fins of a shark account for only around 2% of its weight, so allowing fisheries to sell more encourages finning, they claim. Inthe US, where legislation is tighter, fisheries can only sell around 2% of the weight of their catch as fins.

But according to the Shark Alliance, moves in Europe suggest the situation is set to get worse. Earlier this week, the European parliament’s fisheries committee approved a report recommending the shark fin law be relaxed from 5% to 6.5%. The report was written by Rosa MiguÃ©lez Ramos, an MEP from Spain, home to one of the largest fisheries in the world that catches 50,000 tonnes of sharks per year and supplies nearly one third of all shark fins on the Hong Kong market.

Sonja Fordham of the Shark Alliance said the change would render the finning ban meaningless. "The fisheries committee’s call to weaken finning restrictions signals a troubling disregard for some of the ocean’s most vulnerable species.
"With this week’s vote, they have essentially recommended a policy for finning at least two out of every three sharks landed, thereby betraying the intent of the EU’s ban on finning and the will of the public," she said.
Chris Davies, a Liberal Democrat MEP and environment spokesman to the European parliament, opposed the move. "My fear is that if this is adopted, unacceptable fishing practices will continue and may be accelerated." He added that by the time people realised how dire the situation was the point of no return may have been passed.
Xavier Pastor, director of Oceana, a marine conservation group, said Spain must be forced to reduce its enormous fishing fleet, whose vessels and fuel costs are part-funded by taxpayers.
The alliance is preparing to lobby European ministers ahead of a full parliament vote at the end of September.
"This is a classic example of how the fisheries and policies of the EU dominate global policy and affect the marine environment around the world. If the EU permits this restriction to be weakened, it will be a license to fin and may well be actively copied by other nations," said Ms Bellion.

The digusting practice of shark finning continues worldwide. Here a load of shark fins (mainly Silky and Thresher sharks) has been confiscated by the Palau govenment. These fins were later burned instead of sold as a symbol of the resolve of the governement to stop this practice. 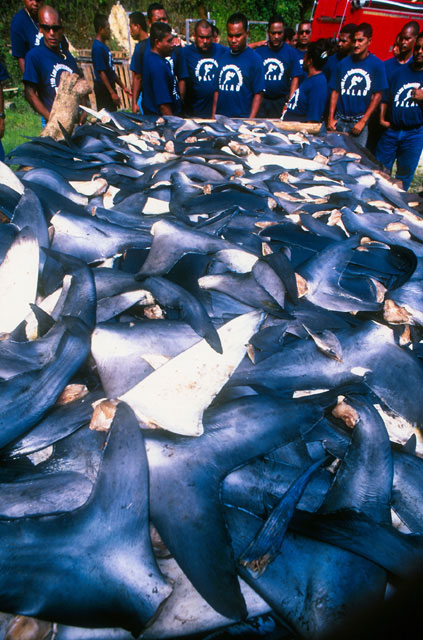